Overview of Buckley and Mann Site in Norfolk, MA

This former mill site on Lawrence Street in Norfolk Massachusetts was tested in 2018 and 2019 and found to have Polychlorinated biphenyls (PCBs, a toxic and very persistent man-made chemical, banned in 1979 in the US), Lead, Cadmium, Zinc, Chromium and other hazardous materials in the environment.

The mill site is a wellhead protection area (Zone II) for the Franklin Public Water Supply. This DEP approved designation is important for protecting the recharge area around a public water supply groundwater source. Franklin's 9000 water users obtain drinking water from Franklin's 12 wells, 2 of which are on Miller Street on the nearby Norfolk/Franklin line. Groundwater from the old mill site also flows to the Mill River, which winds its way down to City Mills Pond in Norfolk and eventually merges with the Charles River. All the land is part of the Charles River Watershed.
​
Hazardous material, including abandoned equipment and textile debris from the mill, was buried over 20 years ago (1998) in an Activity and Use Limitation (AUL) 12-acre area near Bush Pond. It had soil that was compared to a lower standard and covered with a fabric cap and 3 feet of sand and then said to meet the higher standard required in a wellhead protection district. This practice may pose a risk to the nearby drinking water supplies. In May of 2018, the AUL was retracted pending further testing and reporting under the Massachusetts Contingency Plan (MCP)

There are several lagoons and trenches that were part of the factory operations which feed into the nearby waterways. All these locations need to be tested for contaminants as well. (See image below).

The extent of contamination has not yet been defined. Buckley & Mann Inc, the owners of the property, are the Responsible Party at this time for future investigations, though all environmental testing ceased on April 1, 2019 with resignation letter of the LSP of record.

The Property owners, the Responsible Party, under Buckley and Mann, hold a financial inability to pay status.

For more information please go to the DEP website which has this parcel listed under Release Tracking Number 2-3000173 on this link: eeaonline.eea.state.ma.us/EEA/fileviewer/Rtn.aspx?rtn=2-3000173 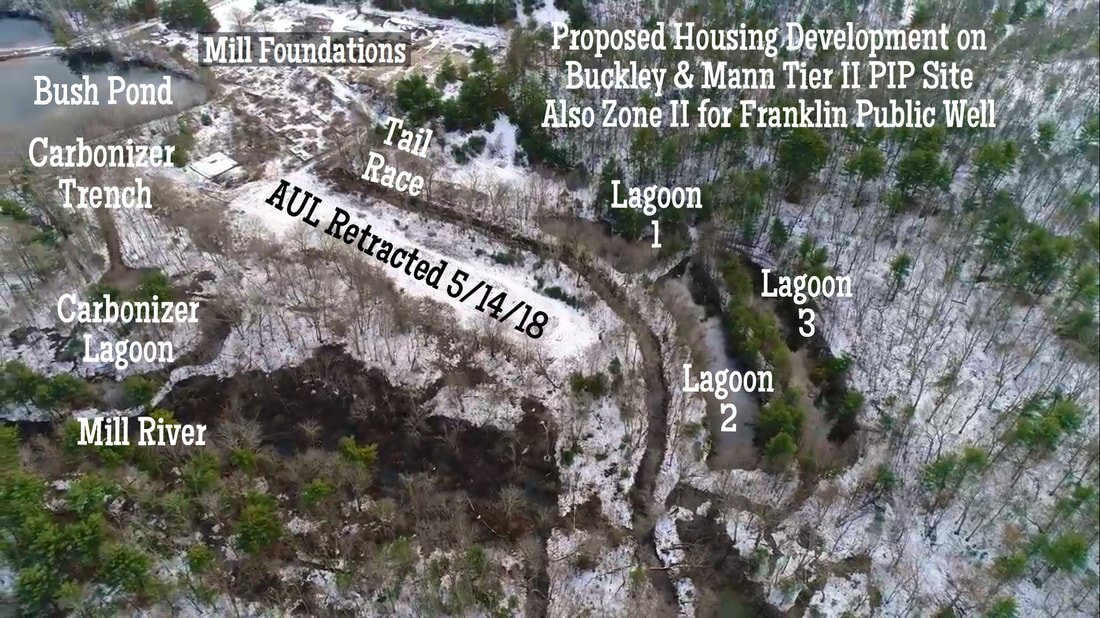